I mentioned the other day that I tried to make a bread from one of my favorite coffee shops. In order to do this, I tried two different tactics. In one, I stayed close to the recipe from Peter Reinhart's Artisan Breads Every Day that seemed most similar to the bread I had. In the other, I made a sourdough version with a couple of key modifications. First, when I at the bread at the coffee shop, I thought that it was only sweetened by milk and not by honey, sugar, or some other sweetness. Although the version from the coffee shop was clearly not sourdough, it tasted much more like the sourdough version because it did not have a sweetener and had more milk (yielding a creamier taste and texture). I will post the sourdough recipe soon. 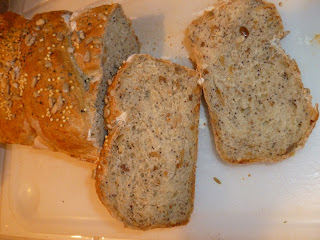 Sourdough directions and ingredients coming tomorrow. Sorry...too much to do. I will write and explanatory post soon.
Posted by Sulpicia (III) at 11:09 PM