The Selfish Baker: A Meditation on Bread Bowls 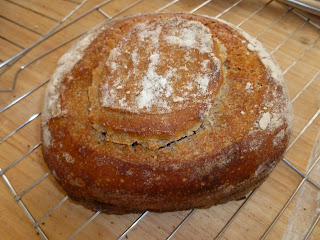 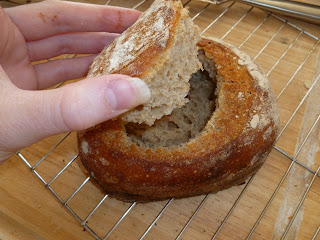 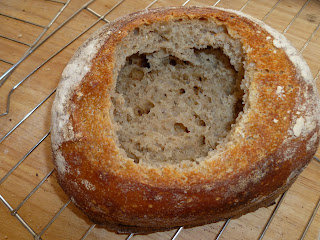 I shouldn't be writing right now. I have way too much work to do and I have pushed out of a lot of obligations to do it. But I need to vent for a moment on a baking-related topic.

My friends in my program at school wanted to throw a party, specifically a potluck. As I love to bake, I thought this was a wonderful idea. I was happy to contribute bread and perhaps other things. But all of my friends got really excited by the idea of bread bowls for soup. Although I was wary, I decided to go for it since it was going to make everyone happy. That was a terrible, terrible idea. The baking project required two enormous batches of dough and at least 12 hours of work; 12 hours I don't have with the amount of work for this weekend. The bread bowls are cute, but they very extremely in size and each one has various imperfections. At this point I don't even want to go; I need to catch up on my work so I can sleep this week. But, everyone is waiting and I have a huge amount of bread I can't eat so I have to.

Here is the lesson that I learned from this: bake either what is easy or what you want to bake. Do not bake to please. Baking (at least for me) is about therapy. I love working with dough and teaching others, but my interests are very selfish. I am involved with baking because I like to share the products (or process) of my meditations. In this case, not only was this process miserable, but as with bread bowls generally, more than half of this bread is going to get thrown out anyway!

Next weekend I am returning to the principle of selfish baking.

Note: Having gone for a nice long walk and done some homework I am feeling slightly less hostile. I think I will just try to remember in future to fully assess the task at hand before agreeing to it. Have a lovely weekend, everyone! 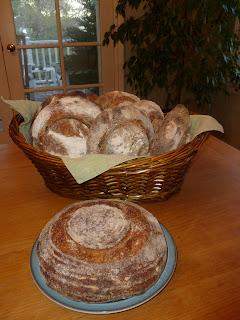 Note: The bowls were quite a success and the party was enjoyable. Afterward, I came home and did two hours of Greek. Still a lot to do, but I finished my Aeschylus and Vergil so things are looking in the right direction.

Posted by Sulpicia (III) at 11:09 AM No comments: Links to this post

Lessons in Food: Paying it Forward

As I mentioned the other day, I recently gave lessons on bread making to some friends. This was an absolutely fantastic endeavor and yielded some lovely bread some of which I gave to them, and some of which I bought to my fellow classicists, who sincerely enjoyed it. The friends who I taught discussed what they might have to trade for the lessons, but we could not think of anything particularly at the time (although both of these women are quite talented knitting, photography, etc. lessons required equipment that was not present). Little did I know that my "paying the lessons forward" would pay off very quickly.

A few nights later, a friend of mine whose father is quite a gourmet chef, invited me to a sushi party. Unfortunately it was one of the nights were I was burning the midnight oil working on translating Antiphon's speeches. However, she decided to drop by and bring me a taster plate of sushi (along with some crème brûlée).
I confess, I am not a fish person, so I was not particularly excited, but I decided to try it anyway. I was absolutely fascinated. Some of the sushi fish was amazing. I didn't learn the names of everything just as I didn't take very good pictures because I was right in the middle of reading Antiphon. However, here is what I remember:

I first tried a spicy tuna mixture which went on some kind of strangely colored cracker. It was fantastic. Next was a salmon cooked with mango and some kind of sauce-- interesting but not my favorite. There was also an uncooked salmon in some kind of sauce that was decent, but once again not my favorite (see a pattern?). Then there were two of the same red snapper, which were pretty good. Finally, on the taster plate, there were two different types of scallops. Both were good, but the slightly sweeter one was better. Finally, the pièce de résistance, was the little dish in the back. I have no idea what it was, but it was fantastic.

This friend also brought me lunch for the next days: miso black cod (cooked) and an asparagus-mushroom dish. The black cod was both buttery and sweet, which was interesting, but I couldn't eat a whole lot of it.
Posted by Sulpicia (III) at 3:20 PM 2 comments: Links to this post

Servia discovered this wonderful series today. It is a podcast from a culinary institute on bread making called Stella Bread. The first episode goes into a useful tutorial on bakers percentages. I did my own written tutorial, but the video tutorial is very helpful because it lays out the math very simply.
Posted by Sulpicia (III) at 2:08 PM No comments: Links to this post

I saw this article the other day in the New York Times and thought it was really interesting. It's about the disappearance of moon rocks from various institutions and what happens to them (e.g. sale on the black market, etc.). I just though it was kind of cool.
Posted by Sulpicia (III) at 8:12 PM No comments: Links to this post

I got some new Bannetons for the holidays so I decided to make some wonderful loaves of Tartine 70% Whole Wheat. The flavor is absolutely fantastic. I simply don't understand people who dislike whole wheat bread. The taste is complex and hearty with subtle hints of sweetness and nuttiness. Yum. 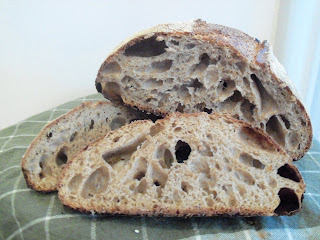 Part of the Triumph here is that the last few times I made it I overproofed it during the bulk rise. I guess I just wasn't watching the time carefuly enough. This one was perfectly proofed . All the same, it's lovely and the loaf bloomed fantastically in the oven. This is the most fantastic whole wheat loaf I have ever made. It is beautiful and tasty.

The other loaf was a boule, and I must have over-handledit because it was not quite as perfect: 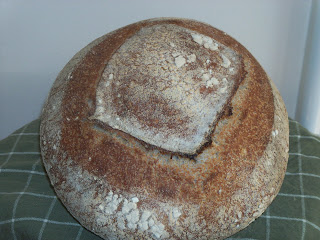 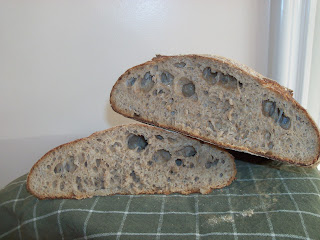 If only my school work could be that successful...
Posted by Sulpicia (III) at 10:03 AM 2 comments: Links to this post

It's funny to me that I am now am going to be providing bread lessons for some friends. Two years ago, I was making my first loaves of bread with no idea or direction. Last year at this time, after a couple of months of absence from bread due to failure and frustration, I finally made a successful ciabatta loaf and restarted my bread making.

This week was the first time my family has bought bread in a long time. I hadn't been able to bake bread this week because I am having a lot of trouble getting my school situation sorted. I finally got a chance to set out some starter to make Tartine bread tomorrow. I can't wait to pass on my knowledge to some friends and make some amazing bread.
Posted by Sulpicia (III) at 9:26 PM 2 comments: Links to this post

Over break I ended up sitting in a waiting room for a very long time. As much as I enjoy waiting rooms for people-watching, people get a bit suspicious if you stare at them. Instead, I decided to read the one novel I got over the holidays. It's the sixth in a series I like called the Thursday Next series. The books are quite silly and enjoyable. They are quick reads; I read the entire book while sitting in the waiting room.

They belong to a category that I would call "metafiction"-- i.e. fiction about fiction-- but that the author himself places in a category called "speculative fiction." Inside the book fiction is a continent divided into countries such as "Racy Novel" and "Science Fiction" with surrounding islands like "Vanity" (i.e. self-published). The story centers around the politics in the fiction landscape and parodies modern day England.

I very much enjoyed One of Our Thursdays is Missing. It was entertaining and kept my mind off of other matters. I would recommend the series to anyone who enjoys Douglas Adams style humor with a literary bent (although make sure you've read a reasonable chunk of classics otherwise its not very funny). The one problem with the series is that the mythology is inconsistent. Fforde does not seem to care about consistency, sometimes even from chapter to chapter, e.g. how to book jump, the process of writing (interfacing author and ideas in the well of lost plots), generics, etc. However, there is something so charming about the writing style and something ridiculous enough about the world that it really doesn't seem to matter that much even to me (mythology is the big thing that excites or bothers me in a novel). I think part of it is the humor; the audience appreciates the joke more than the mythology.

I will attempt to post more regularly as my schedule gets back to normal.
Posted by Sulpicia (III) at 10:05 PM No comments: Links to this post