I confess: I spent a lot of last night reading dinosaur blogs. Seriously. 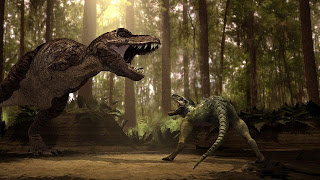 The reason that I spend a large portion of last night reading dinosaur blogs is because they are both interesting-- for someone who enjoys general science and paleontology-- and often very funny. It seems to me that the paleobiologists and the paleontologists of the blogosphere have the acerbic scholarly opinions and bizarre and biting sense of humor that I find characterizes classicists in general, so I felt oddly at home reading about taxons and morphology.

One of the things that I thoroughly enjoyed was a series of commentaries on a television show called Jurassic Fight Club created and/or financed by a guy named "Dinosaur" George and shown on the History Channel. The show used dinosaur fights hypothesized from bite marks and other signs of distress on bones, and employ CG to recreate dinosaur fights, and then has paleontologists comment on these recreations. I came upon the show while reading Nick Gardner's Blog. This entry pointed me to Sean Craven's blog Renaissance Oaf, which provided a hilarious three part commentary on the TV show: Part #1, Part #2, Part #3.

I have no idea whether ever responded to Craven's incisive attacks, but an earlier criticism by another dinosaur blog apparently raised an extreme response from "Dinosaur" George.

If you're interested in this ridiculously melodramatic and scientifically quetionable [1] but enjoyable show, you can watch the first episode here: