The Bread of Life

I have not posted in a while. The reason is, I've been getting a bit depressed.

Canada was great-- I got an award for being the runner up (there called "honorable mention") in the best overall presentation at the conference and I got a little bit of valuable feedback. However, when I got back to school, there was a huge amount of work that had piled up. It was hard. Plus, I began to have real problems sleeping. I thought at first it was the change in time zone, but now I'm not sure what it was. The sleep problems lasted for over a month.

During that month or so, I began to go crazier and crazier. Mood swings, overeating to stay awake, overeating because I was starving all the time, no energy to exercise, the desire to stay in bed all the time. I was beginning to feel like I was stuck in sophomore year.

Even worse, two of my friends died, as did another vague acquaintance from my class. The closest of the friends, whom I shall call Iris because of her bright personality and lightness of spirit (1), ran the community service project that I work for and was the shining light that made it happen and the glue that held it together. I miss her terribly. This also caused a rupture in my world.

In the last week, I have tried to get myself back on track. I'm still overeating a little bit, but I've significantly curbed it. The night before last I finally got some decent sleep, as I did last night. My mood swings are a little better. I've started running again-- there's a half marathon I like the sound of happening in September and I'm hoping to run it! I went to Iris's memorial yesterday. The school community service coordinator asked me to say a few words, since I was the one on the project of whom Iris spoke most highly. So I did. They were short, and not as personal as I would have liked them to be, but I was commended by quite a few people for them, which was nice to hear. I want to honor her memory.

However, the real thing that seems to be saving me is bread. I have started making my own bread. I know-- this sounds like a recipe for disaster, espeically because of my problems with overeating. However, the one time I stayed up late doing work without overeating was because I was making bread. I had to stay awake because the bread needed to rise, be kneaded, bake, etc. In between, I worked on my thesis. It was pretty awesome. At the end, I had two mini loaves of bread, one completed thesis chapter and the beginnings of another. Yay me.

I started off with two different recipes. The first was Original 100% Whole Wheat Artisan Bread in Five Minutes a Day (2). I have to admit, I don't have any white whole wheat flour, so I just used a half-and-half mixture of white and whole wheat. This bread was ok, but not great. It was a little like normal homemade bread-- i.e. slightly too dense. It also didn't rise very much and turned out kind of pancake like-- although it rose outward a lot. I'm going to try with the other half batch of this that I have in the refrigerator and see if I can get it to turn out any better. I did not take pictures of it, sadly, having been up most of the night and very strung out, but I will take pictures of the second batch. The first batch had begun to stale a bit, so I turned it into croutons last night. They're pretty good. I don't make much salad because I'm so ridiculously picky about the lettuce, so I am going to send it to my mother, who makes salads a lot.

The second was Whole Wheat Artisan Bread (3). It turned out quite well, although the loaf spread a bit. The best thing about this bread was that when Cerinthus tried it in the morning, he liked it! Although, he did say he thought it tasted like good sandwich bread rather than good artisan bread, which, in reality, is probably true. The reason that Cerinthus' approval is such a victory is that he discouraged me from baking bread in the first place because he is convinced that only commercial bakeries can bake the bread he likes because the bread his mother and sister made when he was a kid always turned out to be really heavy. However, although this bread looked a little bit hockey-puck like, it turned out really well. 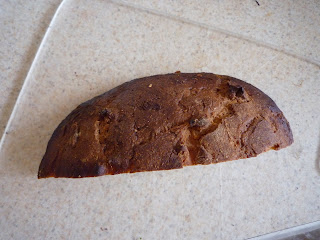 The inside (or I think the bread-making term is the "crumb") looks like this: 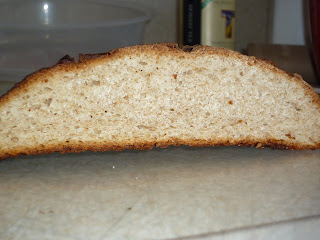 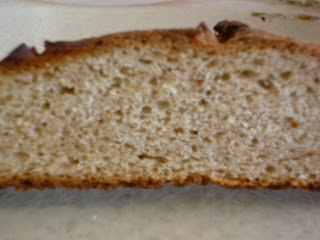 Anyway, I originally thought the shape of the bread was due to not having a loaf pan, but later I found the reason for this spreading was inadequate gluten development (4).

Bread has given me a reason to be excited about research and thesis. I have something to look forward to. Although Cerinthus is a light and a joy in my life, he too is less active and bright recently from all of the work he has to endure. But bread is life, and as long as I don't over indulge (either by giving it away or sending it off as croutons) I get to have the joy of baking bread.