I haven't posted in quite a while. It's just been a rough quarter at school. I added an extra class to my schedule and it's been a lot of work. I thought I would post a couple of recent things.

Raclette: I have wanted to try Raclette since I saw it featured in Tartine Bread. Warmed cheese to spread on bread...yum. When Ignatius and I were at the grocery store getting ingredients for chicken picatta one night, I stumbled across some and couldn't resist trying it. Not having an open hearth, I took a heatproof bowl and heated the cheese over a pot of boiling water. I spread it on some fresh oat bread and it was delicious.

+
=
I really enjoyed it, although Ignatius tells me that traditionally raclette is put on vegetables and things other than bread. Oh well.

Ignatius' Cheese: On the subject of cheese, Ignatius used a Roman recipe from Collamella (spelling?) to make some cheese. However, Ignatius got worried that the cheese might have been problematic so he tried it after four days instead of the proscribed two weeks. However, the cheese was delicious, especially melted on bread (like raclette, kind of) and it got better as it aged over a two weeks.

Oyster Mushrooms: A few months back, someone convinced Servia to buy one of those Grow-Your-Own-Oyster-Mushroom kits. Anyway, they were pretty cool and we made some lovely risotto. It was very cool watching them grow. 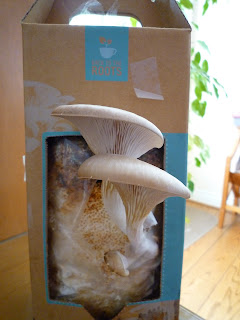 More Oat Bread: I have been experimenting with the wonderful Oat Bread I mentioned previously. Here is one example of the loaves. More bread coming soon.


The Granite Slab: As we have tile counters, kneading is a bit of a problem. I tend to use the Kitchenaid or alternative kneading procedures (like Tartine's) to avoid problems. But Servia went out and bought a granite slab for kneading and pastry work. It's awesome.