So everyone knows that 100% whole grain bread if the most nutritious. For a long time, I have wanted to make a 100% whole wheat bread that tastes delicious, but I've run into issues. Red whole wheat tends to be bitter when in levels above 70% or so. And, honestly, I just don't like the flavor of white whole wheat on it's own, so when I use it I supplement it with red whole wheat and other grains like barley which tends to ameliorate the distasteful flavor. I did this with great success in my last loaves.
However, I still wanted to work out a 100% Red Whole Wheat loaf. Not yet satisfied with the loaves from Reinhart's Whole Grain Breads, although the book is an unbelievably rich resource for information about bread baking (a topic to which I will return in a forthcoming post), I looked for other possibilities. My goal, ultimately, is to make a 100% whole wheat bread with an irregular, open crumb, a crunchy crust, and a hearty, complex, wheaty, but not bitter, flavor. The catch is that I want to make the bread out of only wheat, flour, salt, and sourdough starter. Can it be done? I don't know, but I'm going to find out.
I was very excited when I noticed a 100% whole wheat in Jeffrey Hamelman's Bread. However, when I actually stared reading the recipe, it sounded very much like one of my favorite recipe's, Tartine's 70% whole wheat bread, with the notable exception that it was 100% whole wheat. So I figured that I would start by changing the Tartine version into an 85% loaf, and if it seemed to go well, I would make a 100% loaf. It did go very well, although the crumb was not quite as open as I had hoped, either because of my folding method or because I left it for 16 hours in the fridge instead of 12. Also, the bottom crust was a little too bitter, but it was good. 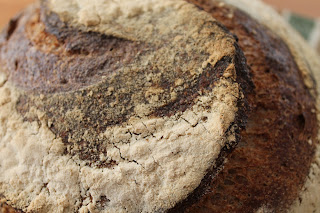 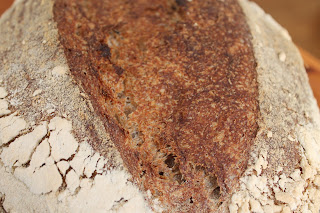 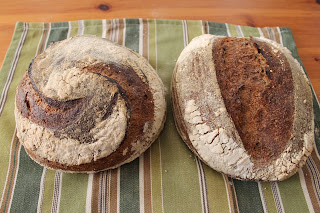 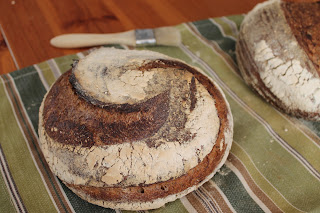 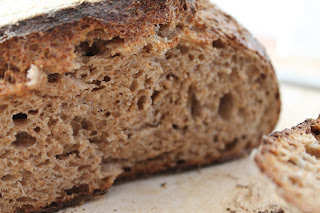 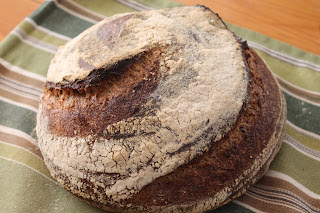 More posts to come on all of this whole wheat stuff!