The Starter Lives! and Adventures in Pizza

Tonight I decided to make pizza. Amusingly, pizza is Cerinthus' food. His mother makes it a lot, but he has never been satisfied by the crust. Tonight he says "this is what pizza should taste like." WIN!

The pizza was not perfect, to be sure, but it was much closer than any homemade pizza he's ever tasted. Here is what I did. I took this recipe (which is technically a deep-dish recipe):

In a large bowl, combine the water, yeast, and sugar and stir to combine. Let sit until the mixture is foamy, about 5 minutes.

Add 1 1/2 cups of the flour, the semolina, 1/2 cup of the oil, and the salt, mixing by hand until it is all incorporated and the mixture is smooth. Continue adding the flour, 1/4 cup at a time, working the dough after each addition, until all the flour is incorporated but the dough is still slightly sticky.

Turn the dough out onto a lightly floured surface and knead until smooth but still slightly tacky, 3 to 5 minutes. I used the method of mixing recommended by Steve from Breadcetera (2).

Oil a large mixing bowl with the remaining 2 teaspoons oil. Place the dough in the bowl and turn to oil all sides. Cover the bowl with plastic wrap and set in a warm, draft-free place until nearly doubled in size, 1 to 1 1/2 hours. (I wish I had a picture. For me I kept the dough in a very warm area. It practically TRIPLED in size.)

Divide into 3 equal portions (I needed to make pizzas on a 12x12 pizza stone). From here, the original recipe requires deep dish pizza pans. I didn't have them, and I had just bought a pizza stone. 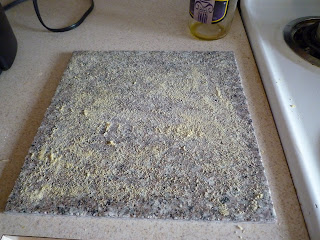 Note: this pizza stone is actually the unpolished part of a piece of granite that Cerinthus got for $4 at a tile store since I am a college student on a budget. I rubbed olive oil into it and the dusted it with semolina flour.
From there, I rolled out the dough, plumped up an inch or so for the crust, and then added tomato sauce (from Trader Joe's) and mozzarella. The dough was way too sticky (and the pizza peel I ordered has not arrived yet) so I used a flour-caked cookie sheet. It worked ok. When it was time to take the pizza out, it had solidified enough that I could move it freely, which was nice. I cranked the oven up to 500 degrees F and cooked the pizza until the cheese bubbled and there were patches of brown. 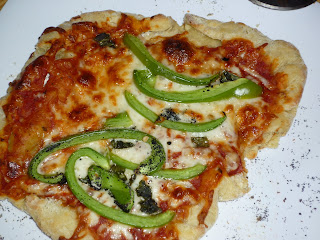 As is obvious, the first pizza got totally mangled as I put it into the oven. However, the crust rose admirably. The problem was that it didn't cook all the way through. I definitely need a solution to this. Ponticus, who came over to have some pizza, said perhaps heating the oven stone up to 500 degrees F and then bringing the oven temp down to around 400 to cook the pizza. I might try that next time.

While the pizza was rising, I decided to check on my yeast starter which, after 12 hours didn't seem to have much going on. But much to my surprise, as the pizza dough rose, so did the yeast in the starter. My starter still looks terrible on the top: 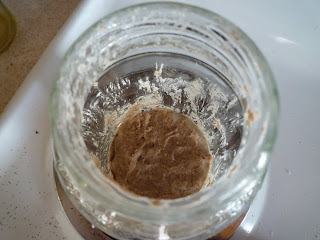 but looks great from the side: 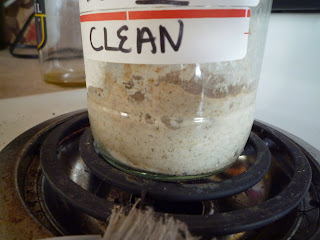 If you can't tell from the picture, it's all bubbly, which means it's alive! I'm SO HAPPY. Sadly, tonight when I feed it I'm going to have to throw half of it out, per Breadcetera's instructions (3). I thought I had killed it because on of the tablespoons of flour I put in to start it was bleached flour (by accident). However, I found out that it grows anyway, although at a slower pace. I'm not sure if this is because of my apartment's heating, or because of the flour, but either way I'm totally happy it lived.