Meditiations on a Cup of Coffee 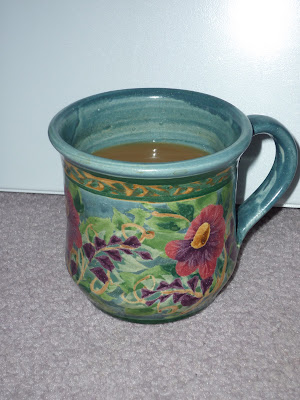 One of the nice things about coffee is that even if it's bad, it makes you feel better at the end of a bad day. This is what I was thinking about Monday night when my finals finished. Having a warm cup of coffee in my hands just made me feel so much better.

My finals were...unfortunate. As I only had two days to study between my final projects and finals, I tried to target my studying to what seemed most likely to be on the exams. As it turned out, I could have moved one of my finals to a later date in order that I wouldn't have to take both finals in a row with almost no break, but I learned that too late (this is what comes from trying to learn the ropes of a new institution). So I target-studied, and this turned out to be a rather ineffective strategy.

What actually ameliorated my wounded pride ameliorated further the next morning. I realized that even if things went as poorly as I thought, I learned a lot. My Greek and Latin are better. I wrote another paper on Plato that utilizes ideas I could not bring into my thesis. And, I have a better idea how the system works. So, at the end of the next term, I'm going to clean up on my finals.
Posted by Sulpicia (III) at 12:04 AM