Christmas Traditions of the Servii, Part 3

Happy Boxing Day! Boxing Day is a British tradition (I think from the middle ages) during which Lords would box up their old stuff that they were going to get rid of and give it to their serfs. Our Boxing Day traditions are slightly different, and most of them come from festivities from the previous day.

The Servii throw a large Christmas Day dinner for friends and family who are in town. The preparation (and cooking) begins directly after presents are opened. It is quite a feat to get it all together (especially because of some eccentric food preferences and allergies), but we all pitch in and make it work. This year we got a little behind because of all the baking, but the party was fabulous and all of the food turned out magnificently.


Turkey Soup and Turkey Quesadillas
I never used to like Turkey. As a kid I hated holiday meals because they involved turkey and green beans, neither dish of which I was particularly fond. In my sophomore year in college, a friend of mine hosted a Thanksgiving Dinner (during which, I think, I was very little help). I had one bite of her Turkey and thought "this is what turkey should taste like." I was hooked. As it turned out, she had used an old family recipe to brine the turkey, which ensured that it came out juicy and tender. So, for that Christmas, I took the recipe and did my own. Every year since, we have made the same the same turkey. I will post the brining recipe in a subsequent post.

One really exciting thing about this year's turkey is that I carved it myself-- or at least I carved half of it myself. I wanted to apply the principles in the video I watched after Thanksgiving (see my blogpost) to carving the Turkey. It was not quite as easy as it looked in the video so I thought I was doing it wrong, at first, and I called on the person who had carved the turkey at Thanksgiving Dinner. He came to my rescue by teaching me how to break the bones so I could separate the wings from the turkey, and beautifully sliced the meat from the bones and cut up the breasts as I carved gigantic chunks out of the turkey (as shown in the video). Amazingly, we got much more meat off the turkey than usual and it seems like an enormous amount of the 15lb pound turkey was left after 13 people had eaten it (three of the guests were vegetarians). Everyone said they loved the turkey, and I certainly love it and will enjoy using the leftovers in quesadillas, sandwiches, and enchiladas.

For now, the turkey carcass is in our big soup-pot, being made into broth with some left over vegetables (mostly carrots and celery).

The rest of the left-over turkey will be made into quesadillas. We make them very simply:

Ingredients
Directions
The Clean-up
The cleaning process is usually a fairly high-spirited affair, although dinner did not finish until 11:45pm this year (well...dessert and conversation did not finish until then), so we were all pretty tired. However, as usual, we made cups of  tea and talked over the evening by the fire before the actual cleaning process. This is a tradition that I really enjoy because we get to exchange anecdotes from the evening and relax in the warm glow. 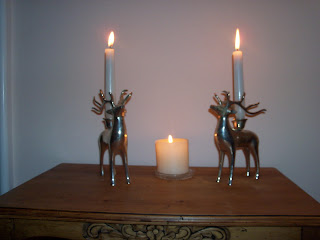