Back at my Alma Mater, I made two sourdough starters. While I was away, my mom accidentally broke the glass jar containing the whole wheat one of the two. Although she managed to keep about 1/4 cup's worth, she made a new starter entirely created at home. Since the starter began bubbling away happily about 2 weeks ago, we decided to make some Pain au Levain (sourdough bread) today, which comes to about half-whole-wheat bread in the way that we have constructed it. It is on it's first period of fermentation now and i hope it comes out well.

The Pain au Levain recipe comes from Bread Cetera, except that I halved the recipe, added extra water (the desert) and exchanged the rye flour for whole wheat. My levain is also whole-wheat in nature.

Update: The bread was a complete disaster. I cannot describe how horrible. Any number of things could have been wrong. It's hardly worth considering, because it was so awful. I'll try again some other time. 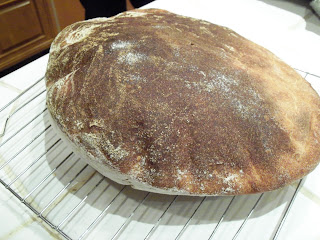